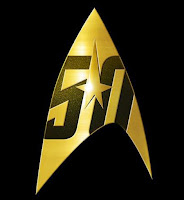 Today is the 50th anniversary of the airing of the first episode of Star Trek. Lake every other Trekkie in the planet (and maybe beyond), I find myself looking back at how the show affected me during those first years.

As I wrote in my article "Spock and Jews in the 1960s" (included in Kevin Neece's book Spockology), there weren't many positive Jewish role models on TV back then:


"This was back when most Jewish actors and writers changed their names to sound more “American.”  The hero was always a Stoic White Man of the Aryan Persuasion who never, ever waved his hands around or spoke with a Yiddish accent like the people on my block.  Even biblical characters were played as if they grew up in the American Bible Belt.  Everybody celebrated Christmas on programs like “Leave it to Beaver,” but there was no acknowledgement of Hanukkah, except maybe to morph it into a “Jewish Christmas,” complete with a bogus “Hanukkah bush.” If Jews were included in the script at all, they were usually played as buffoons."

Of course Spock wasn't Jewish, but Leonard Nimoy was.  And he was no buffoon.

It is well documented that Nimoy drew upon his Jewish background to develop the character.  We all know about the Vulcan Salute being derived from a Jewish blessing gesture, but there are other influences also. His love of knowledge and pride in his Vulcan culture were important to me at a time when intellectuals were disparaged as "eggheads" (forerunner of "nerds") and being Jewish was something we often hid in order to "pass" in a world hostile to us. I credit Spock with giving me a model for how to live in an "alien" world without losing my identity as a Jew.

It was not until my mid-50s, when I was diagnosed with ADHD and later autism, that I found another reason I relate to Spock.  He does indeed have a lot of seemingly autistic traits, even though Roddenberry thought of them as "logic."  Then again, many autistics are good at math and logic. And like Spock, we often misread human emotions.

All of this, of course, is my own personal transference.  Others see Spock in different ways. Which is fine. Star Trek has always been a mirror in which we see ourselves reflected. That is a big part of its longevity. May it continue to do so for many years to come.

Yonassan Gershom
I follow the teachings of Rebbe Nachman of Breslov, but am not affiliated with any particular group, having learned the Breslov way from his books and by meditation in the forest as he taught. I live in northern Minnesota with my wife Caryl, 2 dogs, 1 goose, 10 cats, a flock of chickens and a bunch of wildlife. No, there is no synagogue here. We hate the city and few Jews live in the country anymore. But no problem, God is everywhere!