The Jewish Origin of the Vulcan Salute


(NOTE: There are numerous versions of this essay online, dating back to my old website and/or adapted from other posts I've written over the years.  Here is my "official" version, taken verbatim from my 2009 book, Jewish Themes in Star Trek.   If you have a dead link going to the old website or another version, please update it with this one.  Thank you.) 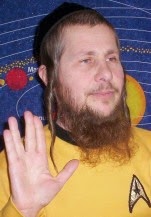 We now come to the most famous Jewish influence on Vulcan culture, the “live long and prosper” hand gesture.  This “Vulcan salute,” as it has come to be called, was invented on the set by Leonard Nimoy during the filming of the second-season opener, “Amok Time.”  In this classic episode, Spock goes into something like a male estrus cycle, called pon farr in the Vulcan language.  Comparing himself to a salmon swimming upstream to spawn, Spock tells Kirk that he must return to Vulcan to mate with his betrothed bride, T'Pring, or die trying.  The wedding ceremony would be the first glimpse of Spock's homeworld in the series.


Nimoy felt that there should be some kind of distinctive greeting among Vulcans, analogous to a handshake or a bow. Alan Dean Foster's novelization, based on an early script, has Spock kneeling before the Vulcan matriarch, T'Pau, who places her hands on his shoulders, like royalty dubbing a knight.  But Nimoy didn't care for this idea.  Previous episodes had already established that Vulcans are touch telepaths.  Therefore, a touch on the shoulders would be an invasion of privacy.  Instead, Nimoy drew upon his own Jewish background to suggest the now-familiar salute.  Back in the 1960s, hippies who watched “Amok Time” thought the salute was a variation of the two-fingered peace sign.  But we Jews knew better.  The Vulcan salute came not from protest marches, but from the pulpit of Nimoy's childhood synagogue.

The Vulcan greeting is based upon a blessing gesture used by the kohanim (koe-hah-NEEM) during the worship service.  The kohanim are the genealogical descendants of the Jewish priests who served in the Jerusalem Temple.  Modern Jews no longer have priests leading services as in ancient times, nor do we have animal sacrifices anymore. (Yes, people really do ask about that!)  The sacrificial system ended with the destruction of the Second Temple by the Romans in the year 70. C.E.  However, a remnant of the Temple service lives on in the “kohane blessing” ritual that is performed on certain holy days.

The actual blessing is done with both arms held horizontally in front, at shoulder level, with hands touching and the fingers forming the Hebrew letter “shin” (SH), which in this case stands for the word Shaddai, meaning “Almighty [God].” 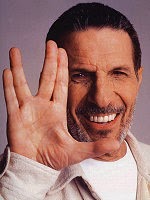 Nimoy modified this gesture into one hand held upright, making it look more like a greeting.  So, technically, the Vulcan Salute is not exactly the same thing as the Jewish blessing. Nevertheless, it is close enough to evoke instant recognition among most Jews.  And it did.

When the blessing is given during the synagogue service, the worshippers are not supposed to look at the kohanim.  The reason for this is to focus our attention on the words of the prayer itself, rather than the personalities of the kohanim.  The kohanim are merely the channels, not the source, of the blessing, which comes from God.  Unfortunately, all sorts of silly superstitions have arisen about this ritual, such as “Don't look at the kohanim, or you'll go blind!” and other nonsense.  The real reason is simply to focus the mind on receiving blessings directly from God, not mortal beings. Many Jews pull their prayer shawls over their heads to avoid looking and to focus more intently on the words.  Some parents gather their children under their shawls as well.

Like most Jewish children, young Leonard could not contain his curiosity about what the kohanim were really doing up there in front of the congregation. He writes:

“The special moment when the Kohanim blessed the assembly moved me deeply, for it possessed a great sense of magic and theatricality...  I had heard that this indwelling Spirit of God was too powerful, too beautiful, too awesome for any mortal to look upon and survive, and so I obediently covered my face with my hands.  But of course, I had to peek.” (Nimoy, I am Spock, p. 58)

Young Leonard survived his peeking unscathed, and saw the kohanim extending their fingers in the mystical “shin” gesture.  That magical moment remained with him for life, and was there to draw upon years later, when he invented the Vulcan salute.

Did Gene Roddenberry know, at the time of filming, that the Vulcan salute was based on a Jewish ritual?  That question remains unanswered.  My sense is that he probably did not, or he would have objected to it, on the grounds of its being too Judeo-Christian.  More likely, he thought it was a weird variation of the hippie peace sign.  Certainly, that's how Gentile Trekkers saw it for many years.  Only much later did Nimoy publicly explain the source of his inspiration. 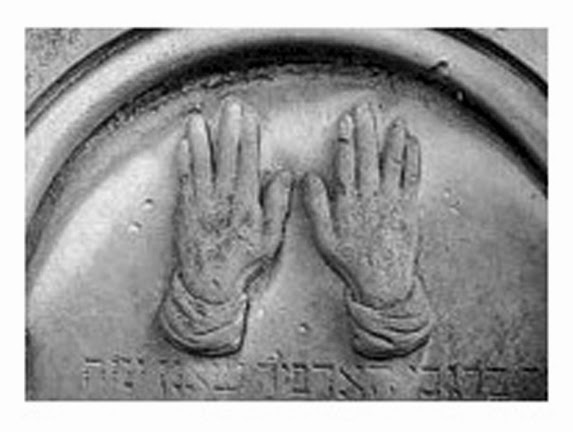 We should also note that the prohibition against peeking only applies during the actual ritual.  The gesture itself is nothing secret.  You can see it displayed in books and on amulets, jewelry, and art.  On gravestones, such as this one in an old cemetery in Europe, the blessing hands signify that the deceased was a kohane. The same symbol is still used on Jewish graves today.

Contrary to urban legend, Nimoy was not violating any Jewish taboos by using this gesture on Star Trek, especially since he modified it from the original version.  I, for one, think it's absolutely wonderful that something so authentically Jewish has become universally recognized as a greeting of peace.  More than anything else in Trekdom, the Vulcan salute says to me, “Here there be Jews.”

The salute also provides a diplomatic way for me to greet female Trekkers without shaking hands. Orthodox Jews do not shake hands with the opposite sex.  I suppose that would also hold true for intersexed alien species.   By using the salute, I can avoid touch without offending anyone.

On the practical end, the ability to make the salute is a bit tricky.  Some say it's hereditary, like double-jointedness.  (I myself can do it easily although, as far as I know, I am not descended from the kohanim.)   And it can also be learned.  According to Nimoy's own account, he spent hours practicing it after he saw it in the synagogue.  When the time came to use the Vulcan salute on the studio set, there it was, perfectly executed without a hitch.

On the other hand, actress Celia Lovsky, who played the Vulcan matriarch, T'Pau, had difficulty making the sign.  She had to set her fingers in place first, before the cameras rolled, and could only hold it briefly.  In later episodes and movies, the irascible Doctor McCoy makes wisecracks about “breaking his fingers.” In Star Trek VI: First Contact, Zefram Cochrane is unable to make the salute at all, and extends a handshake instead.  Rumor has it that some actors had to tie or tape their fingers together first. (If you look closely at William Shatner’s hand in The Search for Spock when he performs the salute, it looks as if fishing line is holding two of his fingers together.  Oh, the wonders revealed by the “pause” button!)

In addition to the salute itself, the ceremonial use of “Live long and prosper” and its lesser-known reply, “Prosperity and long life,” also show a strong Jewish influence.  The format is similar to a traditional greeting in Hebrew: Shalom aleichem (peace be upon you) and the answer, Aleichem shalom (upon you be peace.)  Muslims have a similar greeting in Arabic, a language that shares linguistic roots with Hebrew.  Once again, we can see a strong parallel between Vulcan and Middle Eastern cultures.  In the next chapter, we will further explore how Orthodox Judaism was used by Nimoy as the template for developing his vision of Vulcan society...

Yonassan Gershom
I follow the teachings of Rebbe Nachman of Breslov, but am not affiliated with any particular group, having learned the Breslov way from his books and by meditation in the forest as he taught. I live in northern Minnesota with my wife Caryl, 2 dogs, 1 goose, 10 cats, a flock of chickens and a bunch of wildlife. No, there is no synagogue here. We hate the city and few Jews live in the country anymore. But no problem, God is everywhere!